In the downstairs room of Manchester’s Sound Control, the crowd eagerly creep forward towards HAUS‘ stage set-up. Well, we say stage, but it’s actually all on the same level as the audience, and so, a respectable barrier of space is left between those front-row watchers and the mic stand, which is suitably front-and-centre.

It’s a barrier which almost immediately dissipates as Kendrick Lamar’s ‘HUMBLE.’ blasts through the speakers and the doors next to the stage swing open as the band dance up to their instruments. After a brief introduction to the intimate crowd, HAUS launch full-force into their first song of the set – ‘Blinded’. Second is a new one called ‘Chrome’ with heavy with bassist Ellis Mortimer’s heavy funks lines, mellow falsetto backing vocals and Ashley Mulimba’s fierce frontmanship. 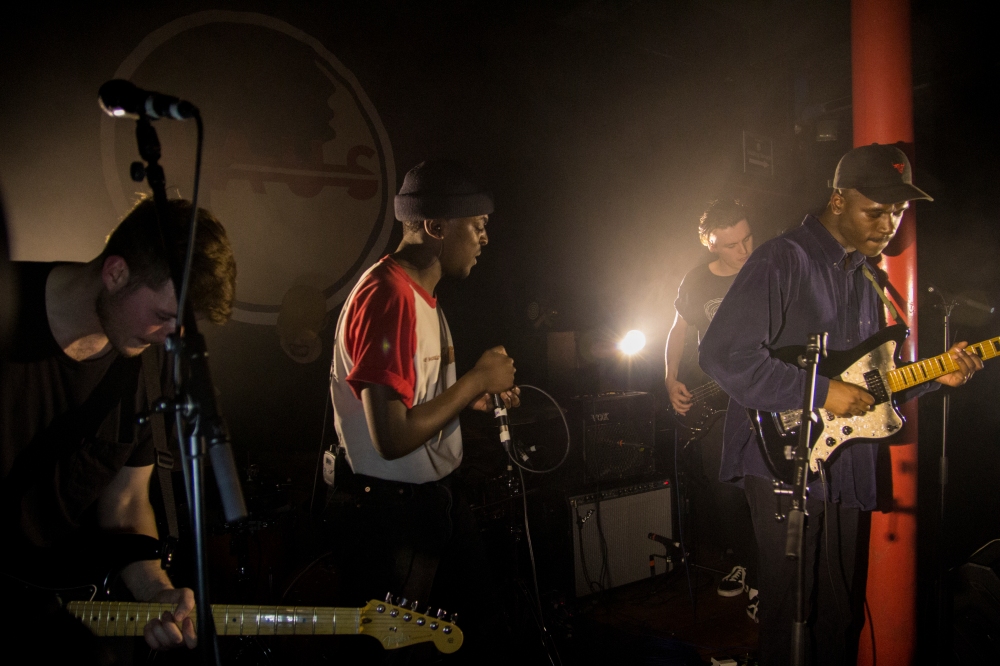 Next up is ‘Two Minds’, where that distinctive, high-toned melody comes with bursts of bright white light, plus bold strings from guitarists Sam Kelly and Daniel Hylton-Nuamah, drums and plenty of reverb. With the consistent building of raw energy, this is the point in HAUS’ show that verges on the animalistic. It’s a sweep spot to strike up with ‘Gave You All’, a sure-fire crowd favourite that has the incessantly stepping audience now singing along with a performance as crisp and biting as the recording. From a fan favourite to one we hadn’t heard yet, ‘Don’t Care’. Fire-fast lyrics are met with punchy drums and full-throttle guitars, all the while Mulimba’s voice descends into an unholy growl.

Switching back to familiar territory, the lyric “live fast die young” lets the crowd know ‘Levels’ is next on the cards. A bright guitar melody courtesy spikes the darkness, which is very much fed by drummer Lyle Simpson’s focussed-yet-wild playing. As the energy reaches new dizzying heights and we’re all on the brink of vertigo, HAUS come in with another much-loved listen ‘Say What You Say’. It would seem here, more than at any other point, the band are most cohesive.

After that, we’re led into the most impressive song of the set. A long, wandering introduction builds an eager anticipation within the crowd. Excitement is then furthered as frontman Mulimba picks up his guitar for the first time, unleashing a dramatic resonance that pairs perfectly with a galactic synth interlude. Despite the fact this is a first-time listen for much of the audience, it’s clearly destined to be an anthem, with lines like “they say everyday happens for a reason,” already picked up by keen fans. At this point, Ashley leaves his band to their sonic building and for a walk around the gig-goers, intensely singing and looking into the eyes of these admiring listeners. Just when you think he’s heading back to the mic stand, Mulimba gets up onto a two-foot high amp (the band meanwhile, continue to be wrapped in the music), and in true rock fashion, leaps into the crowd and leads us all into ‘Oblivion’!

Well… until the encore anyhow. This gig tradition is upheld by HAUS who squeeze through the crowd to the double doors, wait about thirty seconds and then step out again for a rendition of their debut song ‘Haze’. Naturally, the crowd loose control of their senses with wild dancing and singing to the band’s well-rehearsed sonic chaos.